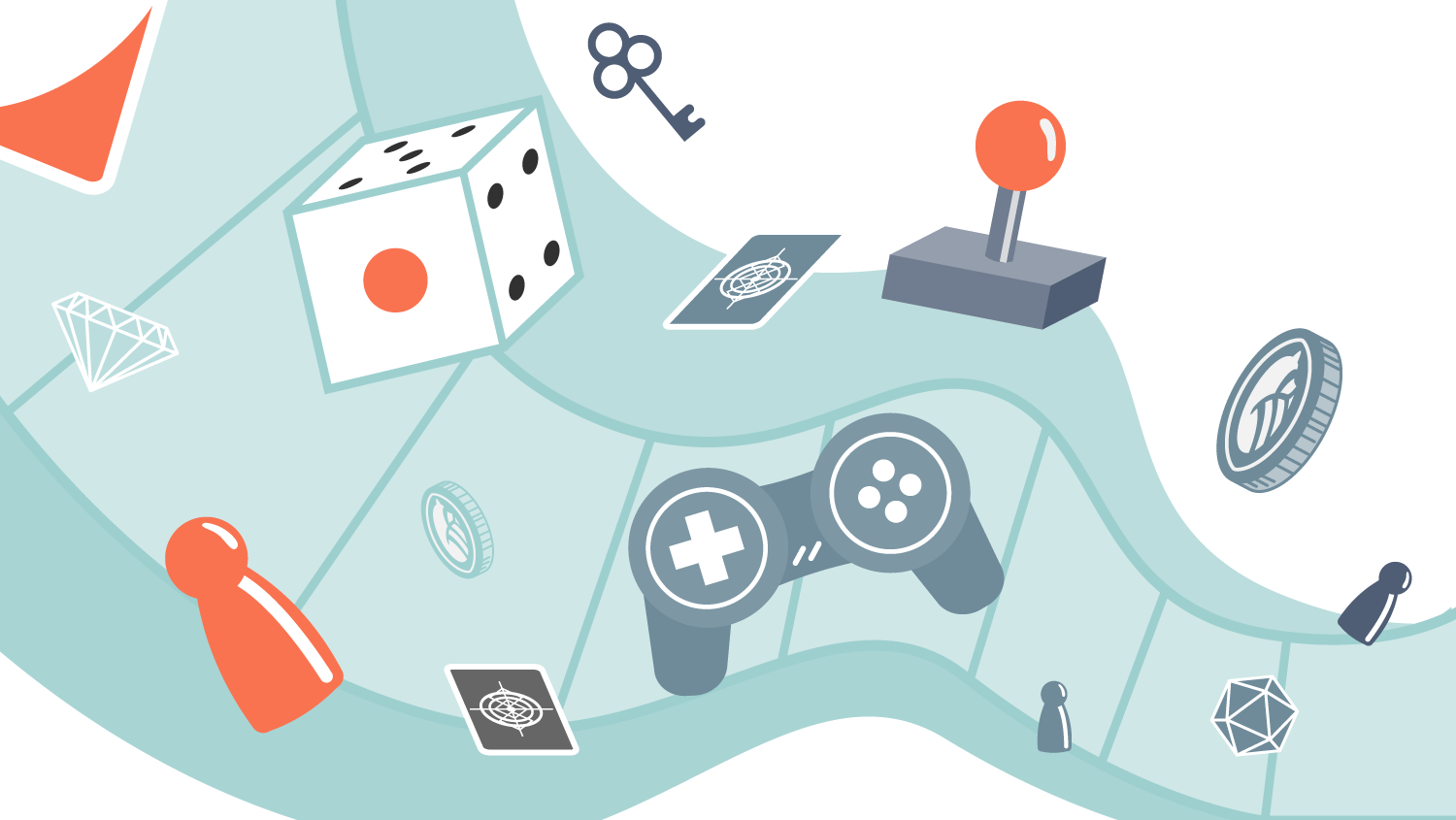 This is the first in a three part series to show how different gamification mechanics work, what they are effective at, and use case examples. We will cover Points, Levels, Rewards, and Progression in this post.

What are points?
Points are one of the oldest and most identifiable mechanics that predates video games and board games: Sports. Keeping track of soccer goals is a form of points and it shows points as a feedback system for positive performance. In other cases, points can also be a spendable resource for players as this increases the perceived value to the user. A gamified example of points that you use everyday are points that you earn by using your credit card or a loyalty card from a supermarket. These points are organized under a points system, which determines how the points work, how they are earned, if they are spendable, and events that increase or decrease them.

Effectiveness of points in gamification

Based on studies about gamification in the wellness space, self-determination theory is frequently used by researchers to analyse the effectiveness of points. Self-determination theory focuses on motivation and how fulfilment of three psychological needs can make an activity something people enjoy doing. Points in gamification fulfill a psychological need for competence.

Competence helps users feel like they can complete and perform tasks that they are assigned to do. Studies show that points which award users for taking correct actions are effective in helping users continue practicing those actions.  Depending on the system, users can be driven to mastery of tasks as gamification helps them clearly determine if they have improved at the task.

How points is used in a gamified project – Bear in Mind
We used points in our Bear in Mind project, a gamified app for mental wellness built in collaboration with SafeCare BC. Bear in Mind is a digital training app which has scenario-based learning for continuing care workers. For this project, points are an excellent solution as it allows awarding users points for taking different actions. More specifically, users are presented with on the job scenarios. Responding to a less effective action rewards users some points, but an excellent solution gives a greater amount of points.

Levels in gamification have two different definitions. They are user leveling and environment leveling.

User leveling has many ties to role-playing games such as Dungeons and Dragons. After players get a certain amount of experience in the game, players level up and become more powerful. A gamified example of user leveling would be Duolingo’s level system where after each lesson you gain experience and level up your rated linguistic skill.

Environment leveling is found in games like Pac-Man where each level increases the difficulty for users. A gamified app example of environment leveling is also found in Duolingo. As the user gets more comfortable with a language, the problems and translations increase in difficulty in each lesson. The user is challenged with new words, and longer sentences to translate.

How levels motivate users in gamification

User leveling gives users a sense of progression and proof of them moving forward. In gamification design, this often involves promoting a user’s avatar strength, which establishes a feeling of improvement over time. The user is also reminded of where they started to contrast against how they have grown and improved.

Environment leveling has a goal of keeping users in a state of flow. Flow is a feeling where you have an appropriate level of challenge for your skill level. An important key to having great flow ranges is providing users some options to allow them to tune a general difficulty to their current skill level.

Use cases of levels in gamification – Invader Crusaders

A hypothetical user leveling example would be a fitness app. For this example, imagine your avatar in the game is a superhero, where the superhero has real world attributes such as strength, speed, flexibility, and coordination. Each fitness activity you register will increase one or more of these attributes and will level up their hero. You can also send your hero out on missions that require your hero to have certain levels in the attributes. The heroes might encounter extra challenges on their mission that can impact the success or failure depending on their attributes.

An environment leveling example is showcased in our client project developed for the Invasive Species Council of BC – Invader Crusaders. This is a web based educational game designed to have different levels unlock as players advance. As players prove mastery over simple levels, they are motivated to continue on to levels that provide a greater difficulty with more aggressive invasive species and advanced challenges.

What are rewards, and how are they different from points?
Rewards can include points but unlike points rewards tend to be given unexpectedly, as opposed to being given after every completion of a task.  An example of rewards would be stickers given out in a classroom.

Why rewards are powerful

Rewards are a strong mechanic and have even spawned genres of mobile games where the rewards system is one of the more compelling draws. Looking into the self-determination theory framework again, we can see that rewards have the strongest correlation with competence and not as strongly with autonomy and relatedness. In other words, they work best at reinforcing the ability of the user. This does depend on how the rewards are used however. If you have a way for users to display rewards to other players, then it would also have an impact on fulfilling the autonomy subsection of SDT theory.

To maximize the effectiveness of rewards, it is useful to look at B.F. Skinner’s famous Skinner Box Experiment. This was an experiment in operant conditioning where an animal was placed into a box with a mechanism which the animal could trigger. The animal would receive a reward if the mechanism was triggered correctly, or punished if it was incorrect.  Skinner tested giving the reward at a fixed ratio, a variable ratio, a fixed interval, and a variable interval. It was found that a variable ratio yielded a steady, high rate of responding correctly, as compared to any other ratio. The takeaway is that this applies to humans as well, and explains the psychology of rewards in gamification.

Rewards in games and gamification

In Raccoopack’s original rhythm game title, Cook to the Beat, players gain rewards after completion of a level. The rewards have different rarities, and even includes accessories which can be added to the player’s avatar. This design encourages the player to explore more content inside the game as they find ways to earn more rewards.

For a gamification example of a rewards system, an idea would be a mobile app that is designed to encourage kids to read more. As kids track books that they have completed and are currently reading, they would get some rewards after completing a book. The number of rewards would depend on if the book is within or above their reading level, number of pages, and how many books they have read within a 2 week period. To give the rewards a greater sense of use, we would have the rewards be used in a competition between different schools to see which school can get the most points.

What is a progression system?

Progression involves two parts. The first half is a framework for progression, and the other half is giving users effective feedback as to where they are at.

Progression as a motivator

Having a well defined progression system is an excellent tool for helping users move from their current state towards your app’s desired end goal. A well designed progression system fulfills the psychological need of competence. By outlining what a user needs to do to progress, and letting them know when they have made progress will help the user feel competent. A consideration is to ensure that if the task has a mode of failure (such as in a diet), then the user is guided back onto the progression path in a positive way.

Use cases of progression systems

We used a progression system in Invader Crusaders, which features levels that can be unlocked. As players beat certain levels, they unlock more levels with increasing difficulty.

Another use case of progression systems would be a gamified app to help users with their goal of writing a book. Our progression system would likely start with users choosing if they want to write a book without planning, or plan their book first.

We’ll go with the planning version for this example. The next step would be to organize the planning of the plot, characters and world. Each of these would break down into digestible chunks to provide a positive momentum to the writers.

After this planning portion, we would have a roadmap for writing the rough draft, breaking down by chapter or pages. There would be reminders on pacing to ensure that the writer is introducing their characters, plot, setting, and hooks at a reasonable pace.

Once finishing the rough draft, we would move the users away from a progression mechanic to another one focused on editing, as the end goal wouldn’t necessarily have the same path through as writing the book had.

One of the takeaways from this blogpost is that there is studied evidence of game mechanics providing increased engagement with digital applications. I hope you found this first post about game mechanics in gamification interesting and insightful. If you have any feedback or comments please let us know through our Facebook, Twitter, or Instagram pages. We’ll have a new post in a couple of weeks outlining more mechanics and their use in gamification!

Review of several studies about gamification in the wellbeing space.

Saul, M. (2021). What is Operant Conditioning and How Does It Work? Retrieved March 17, 2021, from https://www.simplypsychology.org/operant-conditioning.html

Cook to the Beat
https://cttb.raccoopack.com/

Have an idea you want to see come to life?